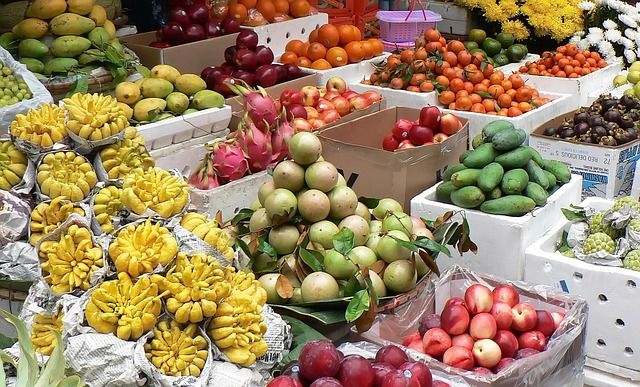 When our orchards go numb, the incredible diversity of tropical fruits brightens up our daily lives. They bring colour, flavour, exoticism and refinement to our end-of-year tables, and promise us a very light dessert. It would be a shame to do without it! A brief review of the essentials…

Tasty, juicy and very fragrant, it thrives in tropical forests. Its many qualities make it a valuable ally for health. It contains vitamins A and C as well as many minerals and thus prevents cell ageing. On the digestive side, it will be perfectly tolerated if consumed ripe at the right time.

Originally from Asia, where it was already appreciated 2000 BC, this beautiful fruit, also known as “Chinese cherry”, reaches its full maturity during the Christmas and New Year holidays. Its freshness and delicious rose fragrance therefore work wonders. Abundantly supplied with vitamin C and fibre, it is ideal for children’s snacks and parents’ desserts, to which it provides energy and energy. It is part of the salty menus where it accompanies poultry and fish. It is used in winter fruit salads, but it is obviously perfect in its own right. Consume it fairly quickly because its shell dries quickly, turns brown and becomes very brittle.

It was born in Algeria at the beginning of the century, from the crossing of a sour orange and a mandarin tree. His name is a tribute to Father Clément who made this alliance. Rich in vitamin C, it is appreciated plain or, for example, in an endive salad whose bitterness it will soften. It benefits from the many primers of orange.

Grown in Provence since the 16th century, it has been known since ancient times in North Africa and southern Europe. Very sour, its juice can replace lemon. It contains a lot of vitamins C and B and fibre, if consumed without removing the seeds.
The 80% water it contains is well endowed with minerals. Spoon out the small grains and eat them as they are or add them to a fruit salad.

Originally from America, it was admired by Christopher Columbus’ companions who appreciated its beauty and exquisite juice. Fragile, it does not keep well and cannot withstand the cold. So keep it at room temperature. If it is often bought in cans to decorate fruit salads, it is much better fresh. It goes well with pies and doughnuts, but is also used in salty dishes, especially those with sweet and sour taste such as pineapple duck.

Symbol of conjugal love, and cultivated in the Middle East for 7000 years, the date is a food of choice for Arab peoples. Brought back to Europe by the Crusaders in the Middle Ages, it was, along with honey, the sugar of the time. Rich in carbohydrates and fibre, it is a good source of vitamin B and minerals, including magnesium, iron and potassium. It is therefore particularly recommended for athletes. She participates in many Arabic dishes such as couscous, tagines and stews.

Wrongly called grapefruit, it comes straight from Israel and Florida. Low in energy, it is rich in potassium and vitamins and therefore anti-fatigue; Choose the heavy one, it will only be more juicy and consume it quickly. Too long a stay in the refrigerator’s crisper would cause it to lose its scent. You can eat it raw, as an appetizer or as a dessert. It is very well integrated into fruit salads. But like pineapple, salty dishes do not scare him. Fortunately, it can be served with poultry and pork.

Bread: the crumb that is good for you